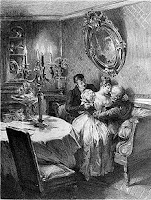 After conquering the literary Mount Everest, War and Peace, I picked up this book for a quick read. By the way, I loved War and Peace, though that is a subject for a different post.  Anyway, I had high hopes for this novel, having loved Eugenie Grandet.  Unfortunately, with this novel I perhaps discovered one of the most annoying literary characters of all time.  Needless to say, I was very disappointed.

This is the story of Goriot and his daughters, Delphine and Anastasie.  Goriot is pretty much obsessed with his daughters.  Now, lots of loving fathers, mine including, take a huge interest in their daughters lives.  What I mean by the word "obsessed" is that he also, in a way, considers them to be his worst enemies.  If they are not constantly by his side, if he makes a joke and they don't laugh, if they don't take all his money and let him dictate their lives, he hates them.  No wonder none of their marriages work out.

Anyway, it might have been an interesting novel if Goriot was portrayed for what he was: an annoying antagonist.  However, I am pretty sure he was supposed to be the hero and I am sorry, I cannot get behind that.

Balzac, you disappointed me.  Well, it wouldn't be the first time a man let me down.  Get out the ice cream, ladies!

Includes characters that are present in Balzac's other fiction.

Vautrin tells Eugene that he is "making him an offer he can't refuse."  Sound familiar?

UP NEXT: The Nose by Nikolay Gogol.
Posted by Amanda at 6:59 AM