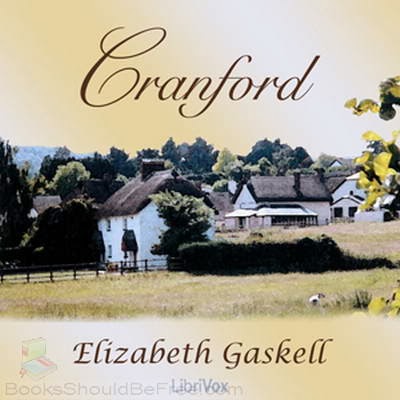 I did not expect a lot from this book, seeing as how Mary Barton, the previous Gaskell from the list, was a huge disappointment.  However, this is a very unique book that is worth the afternoon it takes to read it.

Cranford is narrated by Mary Smith, a spinster who often stay with another "old maid" (these are quite flattering titles for unmarried women), Miss Matty.  There is really no plot; the novel just details random events in their lives.  Throughout the novel, the women take great delight in frightening themselves after there is a report of burglaries in Cranford,  Miss Matty visits her former suitor, Mr. Holbrook, and Mary attempts to find Matty's long lost brother.

So in a lot of ways, this novel is quite ordinary for its time.  The style is like Jane Austen's, only less amusing, and the characters are of a standard stock.  However, the fact that we are hearing about women who, for one reason or another, have never married is actually really interesting.  Now, granted, Miss Matty and Miss Pole seem to be quite miserable about their single status.  On the other hand, Mary Smith seemed to be quite content with her unmarried life.  There was a particularly entertaining passage where the women try to prove they are braver than their dentist, who was too embarrassed to admit that he had been robbed.  The idea that women were trying to prove they were better and more capable than men just seemed really modern to me and it was interesting reading it in a book written in 1851.

So worth a read; Gaskell is not the most talented writer but she is an entertaining feminist.

Published in a serialized form in the magazine Household Works, which was edited by Charles Dickens.

UP NEXT: Villete by Charlotte Bronte.  Yay!