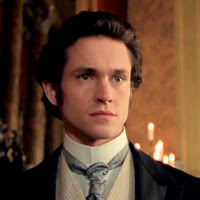 For once I don't have to start off the post by apologizing for not writing for several months, as it has only been a few weeks since my last entry.  This is the fifth and final George Eliot novel on the List.  I am quite sad to see her go, although I won't miss having to tell people who have to comment on the book I am reading that Eliot is, in fact, a woman.

The novel really follows two main characters, both of whom are worthy of being title characters.  I guess it is no secret that Eliot believes a male name carries more...zing.  In any case, Daniel Deronda is the ward of Sir Hugo Mallinger.  He is unsure about his family history, even wondering if Sir Hugo may actually be his father.  Daniel finds himself attracted to the beautiful (or not beautiful?) Gwendolen Harleth at a roulette table.  Gwendolen is touched by Daniel's kindness but is forced to marry the cruel and controlling Grandcourt because of her family's financial troubles.   Meanwhile, Daniel rescues a young Jewish woman (or Jewess as they repeatedly say, making me cringe) from attempting to drown herself in the Thames.  Daniel promises to look after her, getting involved in London's Jewish community in the process.

Sorry if that plot summary was a bit scattered, but it is hard to encompass the content of a 750 page novel in a paragraph.  I was pretty shocked by the majority of this book.  I was expecting a typical romance novel, one that would follow the relationship between Gwendolen and Daniel.  Instead, its sole cause seems to be to support the Zionist movement.  It's odd, because we have seen incredibly cringe worthy Jewish characters in the past (i.e. Oliver Twist).  I guess this is supposed to be progressive, but Eliot still describes Jewish people as if they are another species.  It is, of course, not as bad as what we have seen in the past, but it is still rather tough to read sometimes.  It is so dated now it is hard not to judge by today's standards.  It does seem like at times she promotes the very same prejudices she intends to condemn.  Certainly the ending wasn't very progressive.

Still, it is Eliot so it is elegantly written with fascinating characters.  I still think Middlemarch is her true masterpiece, but this is worth a read as well.

UP NEXT: Virgin Soil by Ivan Turgenev, which will be our last Turgenev on the List.  Lots of goodbyes lately, although I will definitely miss George more than Ivan.