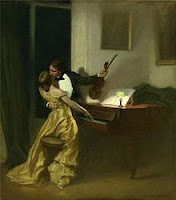 Previously on The 1001 Book Blog (if you know who Jeff Probst is, please read this in his voice), we said goodbye to Emile Zola and let me assure you, that man went out with a bang. Now we are bidding farewell to Leo Tolstoy, but unfortunately, he is not going out quite as strongly as the Big EZ (a nickname I am trying to get started for Emile Zola. Tell your friends).

Pozdnyshev is that guy on the train who seems slightly off and you really hope won't talk to you. You try to avoid his eye but he still directs his rantings in your direction. Our unnamed narrator recounts Pozdnyshev's ramblings as they ride the trains together, which center on his failed marriage and his views on sexual expression (spoiler: it's bad).

Tolstoy became increasingly puritanical as he got older, due to his late in life conversion. Fun Tolstoy is dead and in his place is a crazed preacher. Continuing with our theme of women-hating leading men, Pozdnyshev argues that women still have unholy power over men, despite being men's slaves (huh?), that society is geared towards female pleasure (say what now?), and that everybody should be abstinent even in marriage (did your thirteen children agree?).

I remember reading that the night before his marriage, Leo showed his diaries to his wife, which discussed his sexual past in great detail, including the illegitimate child he had by one of his serfs. Pozdnyshev did the same thing, which one of the many reasons it is obvious that Pozdnyshev is Tolstoy and that Tolstoy is pouring his own self-loathing and hatred of his wife into every page. I  imagine this novella would or did cause everybody he cared about a great deal of pain.

And what other purpose does it serve? I didn't even feel my usual sensation of feisty resentment reading his misogynistic views. It just made me sad. At this point in his life, Tolstoy hates himself and hates humanity. I only felt pity for him and slight annoyance at the Listmakers for allowing him to go out like this. His presence on the List should have died with Ivan Ilyich.

Initially banned in the US.  Wow, this wasn't even as graphic as Zola's works.

My official ranking of Leo Tolstoy's work on the List, from best to worst:

1. War and Peace
2. The Death of Ivan Ilyich
3. Anna Karenina
4. The Kreutzer Sonata

UP NEXT: The Picture of Dorian Gray by Oscar Wilde. Get ready for a rave.
Posted by Amanda at 12:46 PM