198. The Adventures of Sherlock Holmes 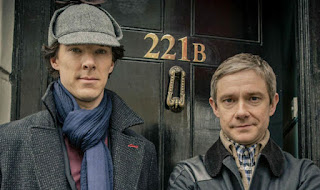 I have probably mentioned this before on this blog, but I have a bone condition called Multiple Hereditary Exostoses, which is my pithy introduction to this post. I spent a lot of time recovering from surgeries when I was younger. One particularly nasty surgery took me out of school for a semester, which was a painful and lonely period of my life. I took this opportunity to read all of the Sherlock Holmes stories. I know it's cheesy, but these characters really felt like friends to me. Needless to say, I took "The Final Problem" rather hard. But these stories are very close to my heart, and I know I am not alone in feeling that sentiment, as Doyle received death threats after he stopped writing about Sherlock. Ah, booklovers.

This is a collection of twelve short stories, all of which are narrated by Dr. John Watson. My favorites in this grouping are "A Scandal in Bohemia," which features the dazzling Irene Adler and "The Red-Headed League," which is a strange little story about a pawnbroker tasked with copying the Encyclopedia Britannica.

Doyle's Holmes is such a fascinating creation that it is unsurprising that people still can't get enough of him. Of course, once you read some of Poe's Dupin stories, you realize how derivative it is, but it doesn't matter. Doyle seems like he is having a lot more fun than Poe ever did, and that gleeful sense of adventure is palpable in his writings.

Doyle has said "The Adventure of the Speckled Band" is his favorite Holmes story.

Sherlock Holmes has been portrayed by over 70 actors in over 200 movies.

UP NEXT: Diary of a Nobody by George Grossmith. Sounds intriguing!