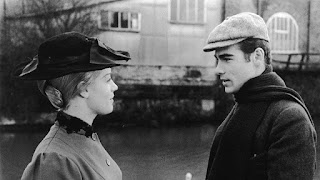 I finally finished reading Infinite Jest, which I hate, hate, hated, but I suppose that is a rant for another post. It's okay. I don't mind waiting. My hate is an eternal flame that will burn long after this blog, and all its readers, are dead and buried. So for now, I'll content myself with discussing Sons and Lovers.
The protagonist of this novel is Paul, the third of four Morel children. Mrs. Morel is unhappily married to her abusive husband, who works in a mine. She is able to endure her life solely because of her love for her children. Paul's relationship with his mother affects every other relationship in his life, and constitutes his Freudian excuse for tormenting other women.
Lawrence is obviously a wonderful writer, and it was fascinating untangling all the relationships in the Morel family. Lawrence isn't as intent on exposing the harshness of a mine worker's life as somebody like Zola, and, interestingly, he never takes us into the mine with Mr. Morel. But we get to see what Mr. Morel becomes because of the mine and the toll his behavior takes on the family. It's really the characters that stand out more than the setting.
The characters are actually pretty frustrating, as nobody seems to act in their best interests. But I really liked this novel and look forward to reading more Lawrence in the future!
RATING: ****-
Interesting Facts:
The character Gertrude Morel was heavily based on Lawrence's own mother.
Received a lukewarm reception by critics, but is now widely considered a masterpiece.
UP NEXT: The Ragged Trousered Philanthropists by Robert Tressell.