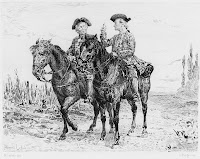 So if any of my readers thought we were done with the Enlightenment thinkers, I was right there with you.  I suppose Diderot is getting his last word before we end the eighteen century.  He will be a nice way to send off the 1700s (only two more books people!) since he is a great representation of this amazing era.

This novel is a weird one.  I actually hesitate to even call it a novel.  The book centers on Jacques (who believes that everything that happens is "written on the high" so his actions don't have a lot of consequence; hence, fatalist) and his Master as they travel to a vague location.  Jacques is trying to tell his Master about his love life but is constantly interrupted by his Master, secondary characters, the author, and the reader.  The reason I hesitate to call it a novel is because Diderot seems to spoof all novels with this book.  Now, think about that for a second, because I, personally, have never seen anything like it.  I have read a lot of books that are spoofs of certain genres, but not spoofs of the novel itself.  So, for example, Jacques will be riding his horse and the author will say that Jacques found a dead body.  Then the author will say, that he supposed that is what we would want to hear because we adore scandal.  In actuality, Jacques did not stumble on a dead body and continued on his way.  In this way, it is one of the most realistic books I have ever read.

In addition to the interesting format, we also get some great anecdotes from all the different characters.  These stories are mostly about sex. Sex in this novel isn't something used for shock value or disgust (here's looking at you, de Sade) but rather as a natural thing that everybody does.

So overall, this was a really great read.  Diderot made me feel like I was sitting with the innkeeper, drinking a glass of wine, and exchanging stories with Jacques.  Nowadays, the stories guys usually tell me start with "So me and my friend were completely wrecked…"

Some of Jacques' love stories are taken directly from Tristam Shandy, which Diderot was quite honest about in the novel.  Team Diderot all the way, I hate Sterne.

Considered to be in the same vein as Cervantes, Sterne, and Rabelais, but more bawdy.  How can anyone be more bawdy than Rabelais?!?