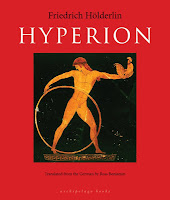 And with this novel, we are officially done with the 1700s!  Hurray!

So I have to admit, it took me quite awhile to understand what was going on in this novel.  By quite a while, I mean until Volume II.  Now, before you think I am a complete idiot, it is written in a style that is probably unlike anything you have ever read.  Holderlin was a poet, this was only novel.  However, this novel is really toeing the line of what prose is.  I felt like I was reading Metamorphoses again.  Gives me chills just to think about it!

Anyway, I finally gathered that this is the story of Hyperion who falls in love with Diotima but has to go to war to fight for Greek independence.  The novel is written in epistolary form but my translator seems unwilling or unable to say where letters ended and whom they were written to.  So that added to the fun.

Overall, this was not a great send off for the 1700s.  It was confusing, melodramatic, and just disappointing.

Holderlin is known as one of the greatest German literary figures of all time.