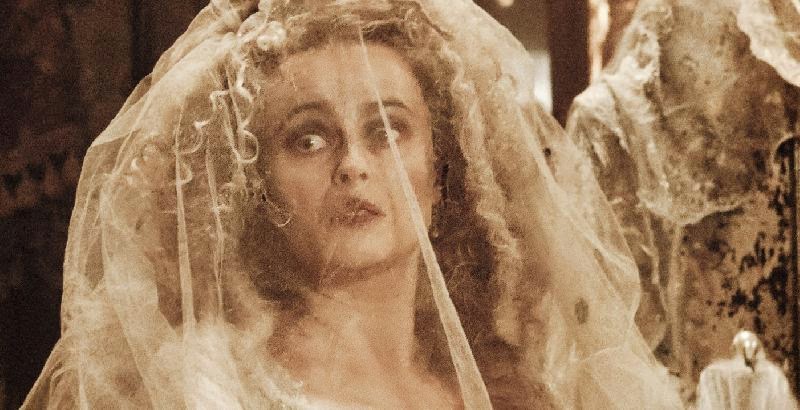 I recently did a count of all the Dickens novels I have read.  I came up with four that I absolutely loved and seven that I absolutely hated.  Conclusion: I am formally recommending him on this blog.  I know; it is such an honor that you are freaking out.  Don't worry; I still think he is capable of being dreadfully dull but on the other hand, he is capable of being hilarious and compelling.

Phillip Pirrip (which is possibly the worst name I have ever heard; subsequently, he is nicknamed Pip) is an orphan who only has his sister and her husband to look after him.  Since this is a Dickens novel, the sister is, of course, a total monster. Pip is eventually anonymously sponsored to be a gentleman.  Oh right, who is the incredibly creepy woman pictured above?  You know, the one from Insidious: Chapter Two?  That would be Miss Havisham, a creepy spinster who takes Pip on in order to provide a companion for her adopted daughter, Estella.  Side note: there were a bunch of sexy pictures of Gwyneth Paltrow as Estella that I could have used for the above picture but I instead chose Helena Bonham Carter being frightening.  You're welcome.

I actually tried to read this book in high school and failed, so I was a little weary going in.  However, I had so much fun with this one, particularly since my sister is currently reading David Copperfield for the first time.  We had a good time reading out loud humorous passages and relating to how melodramatic the characters were (we have a tendency to overstate things).  I still prefer David over Pip, but Great Expectations is a close second.

So after being extremely disappointed in A Tale of Two Cities, we get this novel to make us fall in love again.  It won't last long; we have Our Mutual Friend coming up.  Shoot me.

Mixed reviews by critics but considered by Charles Dickens to be his best book.


UP NEXT: Silas Marner by George Eliot.  I am seriously falling in love with this woman.
Posted by Amanda at 11:35 AM