The Jungle
Upton Sinclair
1906
Around 400 pages 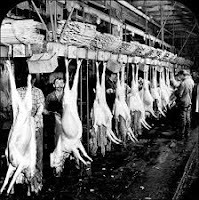 I don't think it was required that we read this is in my AP history class, but I did anyway, either in the pursuit of being extra, or because I was writing an essay. Either way, this was probably the first social justice novel I read, back before Emile Zola ruined me for other men.

Jurgis is a Lithuanian immigrant and thinks he can support his entire family by working at a Chicago slaughterhouse. He's wrong of course, and things get pretty gross.

So we all know exactly why this novel was written, and it's not to create a complex narrative with multidimensional characters. It's to expose the horrifying conditions that workers in Chicago endured and it does that very effectively. I don't find stories as enjoyable when I am being frog marched to a particular point, but this is undeniably a very important novel, and deserving of its place on the List.

An essential read, and another entry on the List that proves storytellers can save the planet.

Sinclair said of the novel, "I aimed at the public's heart, and by accident, I hit it in the stomach."

Teddy Roosevelt referred to Sinclair as a "crackpot."

UP NEXT: The Secret Agent by Joseph Conrad. Ugh.
Posted by Amanda at 11:13 AM