The Voyage Out
Virginia Woolf
1915
Around 400 pages 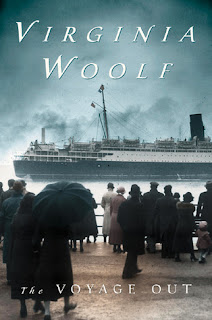 This is the first of nine Virginia Woolf novels on this List, which seems a scooch excessive, even though I like Woolf. This is her debut novel, and probably her most accessible work.
Rachel Vinrace embarks on a trip to South America on her father's ship. On the voyage, she meets many unique individuals. One of these characters is Mrs. Dalloway, who is the central figure of a later Woolf novel. Slowly, Rachel begins to break free of the confines of London life.
I really liked this novel. Woolf can get a bit too experimental for my taste. I like her best when she is satirizing British society, which she does very well here. It's also fascinating to see the inception of so many themes that she would elaborate on more fully in future novels.
So this is a nice introduction and a good way to ease into Woolf's style.
RATING: ****-
Interesting Facts:
E.M. Forster said of the novel, "It is absolutely unafraid... Here at last is a book which attains unity as surely as Wuthering Heights, though by a different path."
Woolf attempted suicide at one point while writing this novel.
UP NEXT: The Good Soldier by Ford Madox Ford. Never heard of it, but digging the author's name.
Posted by Amanda at 2:33 PM