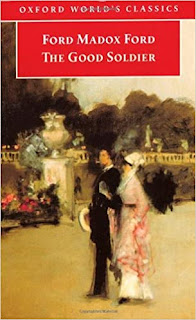 The novel starts with the line "This is the saddest story I have ever heard." I groaned when I read that line. Hey, 2020 has been rough, and I could do with some good old-fashioned escapism. Fortunately, this wasn't as emotionally devastating as the introduction seemed to promise.

John Dowell tells us the story of his marriage to Florence, and their friendship with another couple, Captain Edward Ashburnham and his wife Leonora. Edward has a long series of affairs, but Leonora believes he will eventually "come back" to her, if she manages his finances and lets him get on with his infidelity. Oh, honey. Edward becomes involved with Florence, and John doesn't react the way you'd expect.

I think the narration style might bug some people. John tells the story in much the same way a real person would. The story isn't recounted chronologically, and John often goes on tangents. He'll provide background details here and there. He's a prime example of an unreliable narrator and putting together the "real" story is what makes this novel such a good read.

I am excited to read more books from this era, as I find this period of history fascinating.

The title of the novel was sarcastically suggested by Ford, and stuck.

Ford originally used the name Ford Madox Hueffer, but changed it because Hueffer sounded too Germanic.

UP NEXT: Rashomon by Ryūnosuke Akutagawa. This is a nice and short one.