266. A Portrait of the Artist as a Young Man 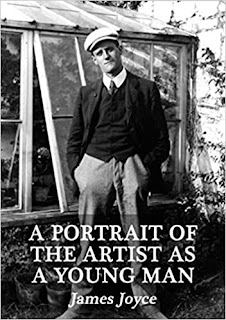 My long absence on this blog has not been out of fear of James Joyce, but because I've been in surgery recovery mode since December 4. I did publish a few drafts here and there that I had written when I was still a young, hematoma-less buck. In surgery recovery mode, I am much too sick or drugged to read. That's okay, though, it's not like it's the greatest pleasure of my life or anything. Thankfully, the discomfort has moved to other areas of my body, so reading a novel to distract myself from pain is back on the table again. Less thankfully, the book that was waiting for me was a James Joyce novel.
Ireland is so proud of James Joyce that I feel like I am insulting the country if I say anything bad about him. And I think I have mentioned on this blog before that I was disappointed to find the Writer's Museum in Dublin is a shrine to Joyce. He's not even my favorite Irish writer (Oscar Wilde for the win!). My only experience with Joyce was reading Ulysses. I thought perhaps I would take to this novel better since his early works might not be quite so...Ulysses-y. I'm pleased to report I was right.
The novel is a Kunstlerroman, meaning it's a story about an artist's growth into maturity. I feel it is necessary to identify and define that term in this blog, since there are so many of them on this List. But artists have to write what they know, dammit, so we will follow Balzac's Lost Illusions plot as often as required. Stephen Dedalus, Joyce's alter ego, grows up in Ireland, with a poor, nationalist father, and a very religious mother. His awakening as an artist and a man is the focus of the story.
As we can see from the above photograph, Mr. Joyce has style. The book begins with Stephen as a child; consequently, the narration uses the vocabulary a child would know. As Stephen grows, the style shifts to accommodate his growing understanding of the world. I think it is incredible that he accomplished this, but did I really want to read those early chapters? No.
I did enjoy reading Stephen's rebellions against the Catholic Church, which were similar to my own feelings growing up. I think when you are raised Catholic, you get to a certain age where you start thinking for yourself, and you do a double take. Like wait, what did he say he would do to unbaptized babies? At 12, I declared myself an atheist and refused to go to any more masses. Joyce took it a step further in his real life, and at his mother's death bed, refused her pleas to make confession or take communion.
It's also interesting how the novel ends, given Joyce's obsession with Ireland for the rest of his life. This review is getting lengthy, so I'll leave it to the 20 million dissertations on the topic to explain this novel properly. I can only explain my reaction to it. I thought it was masterfully written, and not very much fun at all.
RATING: ****-

Interesting Facts:
H.G. Wells wrote that "one believes in Stephen Dedalus as one believes in few characters in fiction."
Joyce omits quotation marks and indicates speech by beginning a paragraph as a dash..
Ezra Pound had the novel serialized in The Egoist in 1914 and 1915, and then published into a novel in 1916.
UP NEXT: The Bunner Sisters by Edith Wharton. Yay. I know my yays are unusually sarcastic here, but this one isn't.
Posted by Amanda at 10:13 AM