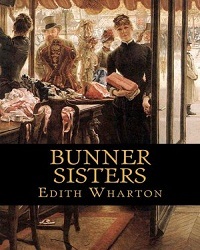 I really loved this story. The List has a habit of endowing well-known authors with way more works than they deserve, at the expense of non Western authors. Edith Wharton has four other entries on the List and honestly, if I had to eliminate one, it would probably be this one. But that is only because the competition is so fierce. Get it, girl.
Anna Eliza and her younger sister Evelina own a store that sells artificial flowers and small, hand sewn articles. Their existence is pretty bleak, but Anna brightens it up by buying a clock for Evelina. When the clock breaks, the women are introduced to a clock repairman Herbert Ramy. He becomes a regular guest at the Bunner home. Since he is only the man in their orbit, his appearance spices up their life a little bit. Now that I think about it, that is remarkably similar to the plot of The Fox, by D.H. Lawrence.
It's difficult to talk about why I enjoyed this story so much without giving away the ending. I'll just say it takes a well-aimed swipe at all those stories and writers (ahem Alcott), who exalt self-sacrifice over pursuing your own happiness, especially when it comes to love and marriage.
I think some people associate Wharton with long, boring stories about parties and gloves. But I'm in awe about how much she was able to do with so little. The characters were all fleshed out by the end, even the elusive Ramy. And I love how the clock, so rich in symbolism, is central to the story.
Okay, I changed my mind. I wouldn't cut any of her novels.
RATING: *****

Interesting Facts:
Rejected twice because of its length.

UP NEXT: Growth of the Soil by Knut Hamsun. This is a Nobel Prize winner, so put on your fanciest hats.
Posted by Amanda at 2:54 PM