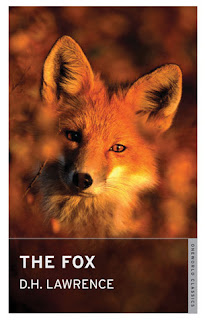 D.H. Lawrence is a master at using symbolism effectively, and this is perhaps the finest example of his remarkable talent. Like Edith Wharton, he is able to do an incredible amount in a very short novel.
Nellie March and Jill Banford manage Bailey Farm without any help. They are in their late twenties and unmarried (read: confirmed spinsters). They are plagued by a fox that has been wreaking havoc on their poultry, and has evaded all attempts to shoot it. One day, a young man shows up and a love triangle of sort forms.
As usual, he really dives into the psychology of his characters and the dynamics between all three characters are fascinating. I guess Lawrence is never really cheerful in his writing, but this was a particularly dark entry in his works.
I guess this is as close as we are going to get to a lesbian love story at this time. I am still enjoying this era of post World War I literature. You really get a sense of this universal feeling of displacement. Definitely looking forward to more Lawrence in the future.
RATING: *****

Interesting Facts:
First appeared in The Dial literary magazine in 1922.
UP NEXT: Ulysses by James Joyce. One of my least favorite books I've ever read.
Posted by Amanda at 2:34 PM