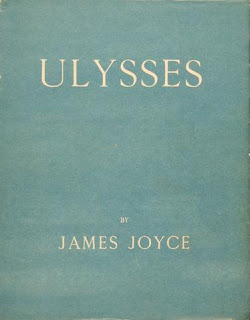 It's been awhile since I read Ulysses. Perhaps I would enjoy it more if I read it now, since my tastes have no doubt shifted over time, likely for the better. But I have practicing self love lately, and that includes not making myself reread really long books I hate.

Over the course of one day in Dublin, Leopold Bloom encounters many characters, including his unfaithful wife Molly and Stephen Dedalus, from A Portrait of an Artist as a Young Man. Ulysses is loosely based on The Odyssey, with the episodes in the novel corresponding to the books of the epic poem.

I think Ulysses has large lost the ability to shock anymore. I can see why this was considered groundbreaking for its time, but to me it felt like a Rabelaisian retread. I like the traditional novel structure enough to not get pleasure out of upending it in this way.

So much style that it was hard to get to the substance. One of those books you "should" read, but should also be thrown against a wall.

Bloomsday is universally celebrated on June 16, the date of the events in Ulysses.

Virginia Woolf wrote that "Ulysses was a memorable catastrophe—immense in daring, terrific in disaster."

UP NEXT: Babbitt by Sinclair Lewis.