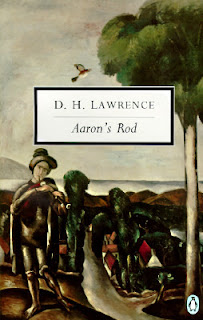 Even as a D.H. Lawrence fan, I think he is overrepresented on this List. This is one of his entries that I would label as expendable. Apparently the Listmakers agreed and removed this one from subsequent editions. But a so-so Lawrence novel is still pretty good.
Aaron Sisson is a union official in the coal mines of the English Midlands. He decides to walk out on his wife and kids to pursue his dream of becoming a celebrated flautist. He eventually ends up in Florence, swimming in circles he certainly wouldn't have been exposed to if he decided to be a good dad.
It's interesting to see this novel appear right after Babbitt. Babbitt was a man who couldn't bring himself to escape the shackles of his domestic life, to the point where you wonder if he ever had a choice in the matter. Aaron manages to cut ties, but it's difficult to argue that he's much better. So I guess it's all pretty bad.
It wouldn't be a Lawrence novel without heavy symbolism. Here he is slightly more subtle than he was in The Fox. But only slightly.
RATING: ***--
Interesting Facts:
Lawrence began writing the novel in 1918, but abandoned it after 11 chapters. He picked it up again in 1921.
UP NEXT: The Last Days of Humanity by Karl Kraus. Technically, this isn't a novel, this is a play. The Listmakers are getting frisky.
Posted by Amanda at 10:36 AM