36. The Castle of Otranto

The Castle of Otranto
Horace Walpole
1764
Around 300 pages

Hello fellow bibliophiles!  I just got back from a weekend getaway to Philadelphia to see the Philadelphia Flower Show.  It was simply beautiful.  Look, I will prove it: 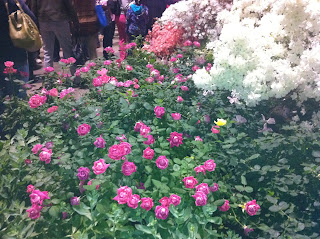 Was I right or was I right?  Anyway, from being in a hotel and on a plane I got to read a lot.  I not only finished this book but I also read Hard Times (ugh) and started the next book on this blog, The Vicar of Wakefield.

Now to my review.  This book is considered the first Gothic novel of all time.  The story starts with the wedding of Isabella and Prince Conrad.  Conrad does not show up because he is busy being killed by a magic helmet (as you can imagine I had a bit of trouble picturing this scene).  Manfred, Conrad's father, then tactfully chooses to try to rape Isabella.  Will she be saved by the handsome knight, Theodore?  Will the secondary characters that I have not mentioned have a role in the story?  Will Manfred succeed in his wicked designs?  Read the book to find out, ladies and gentlemen!

This novel was a really quick read.  It actually felt a bit trashy to be honest.  I enjoyed reading it but I did not take anything away from it nor will I remember it in a couple of months.  It was a nice junky book to read to take a break from Dickens and the Enlightenment.  Read it if you want something light, not profound.

Walpole was so afraid of the novel's potential failure that he used a pen name and pretended that he was merely translating an ancient manuscript.

Influenced by Shakespeare (which is quite obvious if you read the book).