76. The Private Memoirs and Confessions of a Justified Sinner 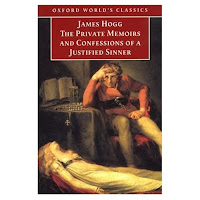 This has been an exciting week for me, literature wise.  I finally finished Anna Karenina (we still have awhile to go before we reach that review) and in the meantime, finished this little book in less than two days.  This is another entirely forgettable novel and I hope to get out of this slump of obscure bores soon.

When I give a summary of this book, it will sound really interesting and you might even want to check it out.  However, I assure you, it is not as exciting as it appears.  The story starts with the marriage of Rabina Orde to George Colwan.  They have one son named George and another son (though it is implied that the second son was not fathered by George) named Robert.  Robert and George grow up in very different environments.  They meet again as adults and Robert torments George, though he later claims he was possessed by the devil.  Or the devil pretended to be him.  Or something else, I really have no idea.

Come to think of it, that summary does not sound exciting at all.  I should tell you that the events of the novel are narrated twice, once by the editor and once by Robert.

Man, we have really been hit with religious fanaticism in these last few novels.  I guess I can blame some of my dislike on that: I really have no understanding of the religious sects in the UK at this time period and have no desire to learn.  Sorry.

However, I think the biggest reason I did not like this book is that I felt like it had sooooo much potential and just completely blew it.  This novel could have been a great horror story about a man without split personalities desperately trying to do the right thing.  Instead, Hogg had to insert all kinds religious mania coupled with an unbelievable character.

Skip it and like I have said before, this novel deserves its obscurity.

Panned by critics upon its initial release.

Said to be the inspiration behind Dr. Jekyll and Mr. Hyde.

NEXT UP: Last of the Mohicans.  I think this was required reading in my high school, but being the bamf that I am, I didn't read it. Actually, I didn't read it because I didn't go to high school my senior year but went straight to college.  Which is also kind of bamf.