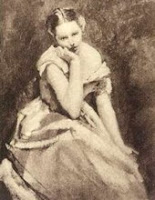 Surprise!  I am back earlier than I expected.  As I said before, I am currently tackling the challenge that every reader must face at some point in their lives: War and Peace.  To make it easier, I am reading it with my sister.  However, she wanted to finish another novel before we started, so I found time to squeeze this book in.  Isn't that just a fascinating story?  Read on for more details!

Just kidding, I would not do that to any of my readers.  Okay, this is the story of Eugenie Grandet, who falls in love with her cousin Charles after his father commits suicide.  Charles is forced to move in with his uncle, who is so rich and miserly that he seems like a Dickens character.  Eugenie puts it all on the line again and again for him, in order to ensure that he is able to continue to live the life that he was accustomed to. And what does she get it return?  Two portraits of his parents.  God, men are the worst all the time most of the time.

This is an interesting story for many reasons.  For one thing, slave trade is basically how Charles makes his fortune.  Now, we have read Oroonko, which was about a slave, and slavery is briefly mentioned in Mansfield Park.  Mostly, however, human trafficking hasn't burst our romantic European fiction bubble.  To have it be discussed in this book, let alone condemned, is refreshing and fairly shocking.

Now, the character of Eugenie is quite typical for a romantic novel: she is beautiful, virginal, pious, and a doormat.  However, I have been noticing a trend lately where the male heroes are actually awful bastards.  Perhaps this means we are moving away from pure romance to more realistic fiction.

Overall, this is a pretty good story and only 200 pages.  Check it out.

Dostoyevsky began his career by translating this novel into Russian.

UP NEXT: La Pere Goriot by Honore de Balzac.
Posted by Amanda at 11:08 AM