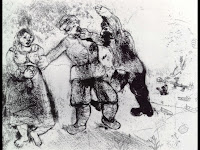 Honestly, this book had me so frustrated that I feel I cannot even give a good review about the first half, which I actually enjoyed.  Toward the end of novel, since Gogol was completely losing his marbles (more on that later) parts of the manuscript are completely missing.  I could forgive missing chapters, but when multiple sentences are cut off, it grates on my nerves.  How annoying would it be if

So like I said, Gogol went a little cray cray toward the end of his life.  He burned parts of the manuscript of Dead Souls and then claimed the devil made him do it.  He then refused food until he finally died a very painful death.  Hence the somewhat incomplete story.

This is the story of Chichikov, a man who decides that he wants to be better respected and have a higher rank so he decides to buy the "dead souls" off richer people.  Because Russia didn't exactly have a frequent consensus, Russians were forced to pay taxes on serfs, even after they passed away.  Chichikov buys these names off rich people so that it seems like his estate is bigger than it is.  Most of the book focuses on his interactions with the somewhat eccentric sellers.  Apparently, Gogol was aiming for an Odyssey/Divine Comedy vibe.

I have been trying hard to decide whether or not I liked this book.  On the one hand, I was never that bored (except for the end which felt like I was talking on the phone to someone who had really bad cell phone reception).  On the other hand, I just could not connect to this book.  For instance, Chichikov is said to blow his nose in such a loud and "impressive" manner that his servants are instantly impressed with him.  Um, wtf?  Additionally, he is a fake person who is brutal to his servants so I didn't exactly enjoy following him around on all his adventures.

This book was supposed to criticize the faults in the Russian character.  I suppose that was achieved, mostly because everyone in this novel was kind of an ass.

Overall, I suppose it was worth a read but it is certainly not a favorite.

Ends mid sentence just like Laurence Sterne's A Sentimental Journey which was also reviewed on this blog.

Gogol described this book as "an epic poem in prose".  That makes zero sense.

UP NEXT: A Christmas Carol by Charles Dickens.
Posted by Amanda at 9:54 AM