A Tale of Two Cities
Charles Dickens
1859
Around 250 pages 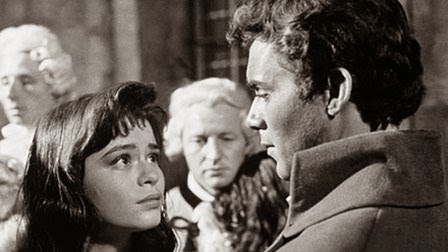 I am currently in bed after a rather serious surgery on my leg and foot.  It is uncomfortable as hell and I am not allowed to put weight on the right foot for six weeks.  That's right fellas: I am hell on wheels.  In any case, I expect to be reading a lot this summer and updating this blog frequently.

I was willing to give Dickens another chance after Nicholas Nickelby and David Copperfield.  However, I am forced to realize that giving a man a second chance is always a stupid thing to do.  This was one of the dullest books I have ever read.

Basically, this book is about the start of the French Revolution.  While this might sound interesting, there are so many boring characters thrown into the mix and it becomes exceedingly dull.  Lucie Manette is a character we all seen roughly 500 times?  She is a perfect, meek angel that everybody falls in love with.  Groan.

Overall, one of my least favorite Dickens' novel.  Hopefully the next one will serve as a better distraction.

Most of the characters in this novel are flat.

A Tale of Two Cities is considered the least humorous of Dickens' novels.

UP NEXT: Max Havelaar by Multatuli. Huh?
Posted by Amanda at 4:16 PM