Return of the Native
Thomas Hardy
1878
Around 500 pages 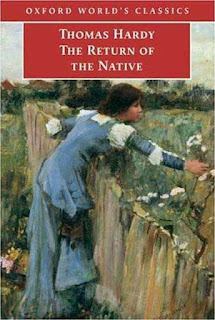 Hello all!  I just got back from a very relaxing beach vacation.  I am not sure if Return of the Native was the most thematically appropriate book to read while lying in the sun and watching hot guys bodysurf, but I absolutely adored this novel.

Thomasin Yeobright plans on marrying Damon Wildeve, a local innkeeper.  Her aunt disapproves of the marriage for good reason, as Damon is kind of a rogue (21st century translation: a dick).  Thomasin and Damon are unable to get married on the fixed day due to a mistake in their marriage license.  Not wanting to be seen as a "fallen woman," Thomasin begs the local reddleman, Diggory Venn, to take her back to her aunt's house.   Diggory is in love with Thomasin, because every young woman in these novels has at least two men in love with her at a time.  Thomasin is unaware that Damon is also in love with Eustacia Vye.  Eustacia dreams of getting away from the heath.  When Thomasin's cousin, Clym returns from Paris, Eustacia believes that he is the hero of her dreams.  Love pentagons can be hard to explain so I apologize if that was confusing.

My heart ached for the England while I read this.  I know it is cliche to label the environment as one of the characters, but with Hardy it is true.  The way everybody reacted to the heath was indicative of the deeper natures of their characters.   For Clym, the heath represented something untamable and beautiful, so his attraction to Eustacia felt very natural.  For Eustacia, the heath was oppressive in its wildness, which is ironic, given the similarities between her and the home she loathes.  I suppose some might call her the villain of the novel, but she was far more interesting than her vanilla counterpart, Thomasin.

Beautifully written and I can't wait for my next Hardy.

Referenced in Catcher in the Rye.

UP NEXT: The Red Room by August Strindberg
Posted by Amanda at 11:24 AM