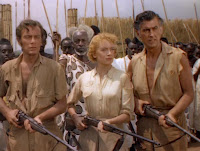 This book is dedicated "to all the big and little boys who read it." Tentatively, I kept reading, fearing at every turn that my vagina would prevent me from understanding the story. Thankfully, despite the burden of my female genitals, I was still able to enjoy this novel.

Allan Quartermain, a white hunter in Africa, is approached by Sir Henry Curtis and his friend Captain Good, who are searching for Curtis's brother. His brother was last seen hunting for King Solomon's lost mines. Quartermain agrees, as long as it gets a share of the treasure (should they find anything) or his son is provided a stipend (should he be killed along the way). Your son would probably rather you be alive and present in his life rather than sliced in half by an elephant (even if it did come with a cash prize) but whatever. Manliness and whatnot.  Let the adventure and political incorrectness begin!

Oof. Well, there are obviously plenty of cringeworthy moments in this novel. Quartermain's meditations on the impossibility of racial mixing are particularly uncomfortable. But, as The Book points out, his views are actually not quite as horrifying as they could have been. He does have some amount of respect for the cultures he is observing and there are POC who are not portrayed as completely amoral savages (although we get plenty of those as well). Of course, it's unfair to judge his writings based on 21st century ethics, but that's never stopped me before.

This was still, in many ways, a thrilling adventure. I did feel slightly resentful of Haggard when he would frequently write something along the lines of "I will leave it to the reader's imagination." Dude, that's just lazy. However, it was still a nice break from some of the other books on The List, that don't seem to leave the main character's drawing room. Because of its influence, it deserves its place on the List.

Haggard wrote the novel as part of a wager with his brother, who said he couldn't write a novel as good as Treasure Island.

Quartermain was one of the inspirations behind Indiana Jones.

UP NEXT: The Strange Case of Dr. Jekyll and Mr. Hyde by Robert Louis Stevenson. I've already read this one, so expect a review soon!
Posted by Amanda at 7:24 AM