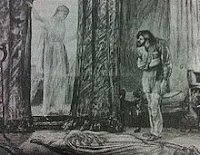 Well Victorian anxieties toward women have really reached a fever pitch with this novel and I have to say, I am not sorry that this is the last Haggard novel on the List. We will just have to get our racism from other sources now, like Burroughs or Kipling.

An extraordinarily ugly man named Horace Holly is entrusted with his colleague's five-year-old son, Leo. Holly promises his dying colleague that he will not only look after his son like he was his own, but will also give Leo a mysterious iron box when he turns 25. Twenty years later, Leo is a total hottie and ready to open the box. I won't spoil the contents of the box, but suffice to say, Leo, Holly, and their servant Job are soon thrown into a Haggard-y adventure, complete with cannibalistic natives and hungry lions.

The She in the title refers to She-Who-Must-Be-Obeyed, a 2000-year-old whose main power is extreme hotness. Her beauty is almost treated as a crime against men, forcing them to submit to her will. In fact, just about every despicable act committed by men in this novel is blamed on women (so what else is new?). As I always, I try to refrain from spoilers, but it's hard not to read this story as a cautionary tale about what happens when women are in power.  Of course, there is no denying the influence that She had on future, better characters, like Jadis the White Witch and Galadriel.

Once again, all non white people are treated with contempt and condescension. The best that can be said is that this more a case of classism than traditional racism, as their white servant Job could have been a dog for all the difference it made in the plot.

In any case, the story does contain many exciting bits; who doesn't love a battle between a crocodile and a lion? Still, it is ultimately skippable.

According to Haggard's daughter, the name "She-Who-Must-Be-Obeyed" came from a doll that Haggard was terrified of as a boy. Apparently, his nurse used the doll to scare the children she was in charge of. Can we hear that story instead?

Has never been out of print.

UP NEXT: The Woodlanders by Thomas Hardy. The last Hardy novel on the List. That makes me sad.
Posted by Amanda at 3:28 PM