By the Open Sea
August Strindberg
1890
Around 200 pages 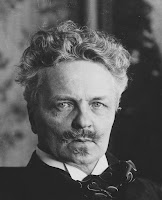 "To caution the boy against the supreme power of the sexual instinct was equivalent to casting a slur on womankind." Thank goodness Strindberg sticks up for us woman like this and prevents our good name from being tarnished. Keep fighting the good fight, August. Let's take a minute to appreciate a few more quotes from this novel that prove Strindberg is God's gift to womankind.


Now, you could of course argue that Strindberg doesn't necessarily hold these views; these are the views of the main character, Axel Borg, a man so completely insufferable that he could only be Strindberg himself. Strindberg describes a man who is a literary genius, unappreciated by the stupid, mediocre villagers around him. It's obvious to me that Axel Borg is Strindberg, but as I am a woman, and thus am incurably childish and moronic, Strindberg would advise you not to take my word for it.

I'm all for books with insufferable main characters. I even liked The Catcher in the Rye, although at least with that novel, you walked away with the notion that Holden would grow out of his ideas; Axel is in his thirties so I am not holding out much hope.

Strindberg is a mean writer. He is mean to his characters and mean to his readers. Although to be fair to Strindberg, he probably didn't expect a woman to read his book (our brains can't handle the words, you see). Last Strindberg on the List. Don't let the door hit you on the way out.

Ingmar Bergman and Tennessee Williams have both cited Strindberg as an influence. I do not find this particularly shocking.

UP NEXT: La Bete Humaine by Emile Zola.  Last Zola on the List!
Posted by Amanda at 1:45 PM