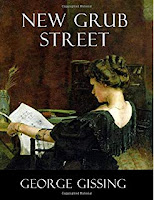 Authors love writing about writing. I actually just finished writing my first novel, so I relate a lot to the angst and bitterness expressed in these pages. Still, it's difficult for me to ascertain if this would be a total yawn to non writers (otherwise known as normies) or not.

Three writers of very different temperaments are described in this novel. We follow their failures and successes (but mostly failures) and in doing so, get a fairly strong grasp on what Gissing thinks of the modern literary scene. Edward Reardon is a talented writer, but his books have little commercial value. Unable to provide for his family through his writing, he consents to take a clerkship which humiliates his wife. Harold Biffin refuses to write anything other than Literature, and thus lives a penniless existence. And finally, Jasper Milvain is a cynical writer who attaches little importance to artistic integrity. Or any kind of integrity really.

Gissing nails almost every emotion that authors can experience: frustration at writer's block, bitterness at the perceived inferiority of popular fiction, and the mental tug of war that writers experience where sometimes we think we are geniuses and other times mindless hacks. Like I said, I'm not entirely sure this would be of interest to somebody who just wants to read a good story, but as a writer I found it very relatable.

Gissing is also really funny, but I am abstaining from giving this five stars only because it did drag on longer than was necessary.  I'm eager to read the next Gissing novel on the List. Only four more books before the big 200!

Title refers to London's Grub Street, which was known for its concentration of hack writers and struggling poets.

UP NEXT: News from Nowhere by William Morris.
Posted by Amanda at 2:51 PM