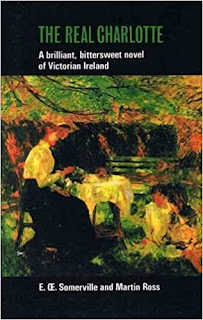 This is an overlooked novel. So overlooked, in fact, that it doesn't even have its own Wikipedia page. Consequently, I failed to find many interesting facts about it. But I don't have to worry about that for another five or so paragraphs, so let's not concern ourselves with that right now.

Charlotte Mullen is smart and unattractive. Her cousin Francie Fitzpatrick is stupid and attractive. I'll leave you to guess which woman is more of a hit with the Victorian male set. Francie attracts a lot of attention, but only has eyes for the caddish Hawkins. Charlotte is in love with Roderick Lambert, for whatever reason (he doesn't even qualify as Victorian-hot). Roderick is at first quite content having Charlotte fawn over him, but gradually becomes attracted to Francie. Hell hath no fury...

Some might call Charlotte deranged. I would prefer to think of her as plucky. It's hard not to sympathize with this woman, who is easily smarter than every male character in this story, but has no real career path open to her besides bitter spinster. As always, I will honor my self-inflicted no spoiler rule, but I do have to say I loved the ending. I totally understand the impulse to end the novel this way, especially when you consider the way this kind of plot has typically been handled with male hands.

I couldn't believe that this was written by two people. I have no idea how they managed to meld their voices so beautifully into one. I can only be grateful.

Written under the pseudonym Martin Ross. The best female authors have male pen names.  That's why I'll be going by Steven from now on.

UP NEXT: Jude the Obscure by Thomas Hardy. Our last Thomas Hardy on the List. That makes me unreasonably sad.