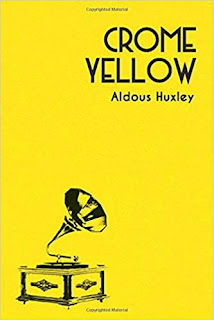 I really liked A Brave New World but never bothered to explore Aldous Huxley's other works. I don't know why. I guess I read enough old British male authors as is. This was a decent introduction to his other work and was wildly different from what I was expecting.
Denis Stone, a young poet, is invited to stay at Priscilla and Henry Wimbush's country house, along with a handful of other guests. Denis is secretly in love with the Wimbushs' niece, Anne, but lacks the courage to voice his affection. Other guests include Mr. Barbecue-Smith, a literary hack who tries to "help" Denis' writing and Mary Bracegirdle, who is determined to have a romantic adventure.
I like novels like this, where the emphasis isn't so much on plot. Instead, we simply get to observe a diverse cast of characters discuss the ideas of their time. Huxley is a deeply philosophical writer, and I enjoyed his exploration of different questions. It was also interesting to analyze his commentary on contemporary writers of the time. One character, Scogan, is able to guess the plot of the novel Denis is working on, which strongly resembles Portrait of the Artist as a Young Man. Scogan isn't wrong about that story being done to death and I will take any Joyce bashing I can get.
This is Huxley's first novel, but he seems to have found his voice already. I imagine they will only get better from here.
RATING: ****-
Interesting Facts:
An American musical, Virginity, was inspired by Crome Yellow. In the musical, the deaf character Jenny is given the lead role. That seems cruel.
The story of Hercules Lapith was adapted into a radio play.