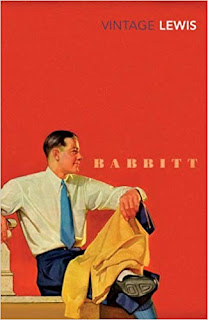 George F. Babbitt is man's worst fear come true, which is why he makes such great character.  He's on the conveyer belt but he still has a little fight in him. Come to think of it, it's my worst fear too.
What's strange about this novel is there really is no story. George briefly struggles against his marital and family bonds, before giving up the fight. His friend Paul takes a slightly different approach in rebelling against his institutions.
Sinclair Lewis is shaking his head at America's consumerism and bleak sameness here, without offering much in way of solutions. I don't think it matters, though. Rarely have I seen such a searing indictment on the average man. John Updike does a brilliant job elaborating on these themes in his Rabbit Run series in about 40 years.
Just by describing Babbitt's morning routine, we learned everything we needed to about him. That's talent.
RATING: ****-
Interesting Facts:
After the publication of this novel, the word "Babbitt" entered the English language as a term for a person who conforms unthinkably to middle class standards.
Won the Nobel Prize in 1930.
UP NEXT: Aaron's Rod by D.H. Lawrence.
Posted by Amanda at 9:34 AM