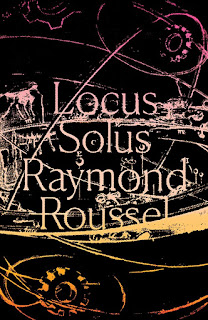 I guess I forgot just how weird Impressions of Africa was, and started this novel thinking I would be able to follow the plot. As the novel progressed, I remembered that Roussel is above such petty things as telling a story, and instead drifts, dreamlike, through set pieces. And you're expected to drift along with him.

Martial Canterel is an inventor and scientist who invites his friends to his estate, Locus Solus. He has many bizarre inventions to show off, and the descriptions of the "devices" make up the entire novel.

I think this is one of those surrealistic works that depends very heavily on the music of the language, because it's so lacking in the plot and characters department. Therefore, much is lost from the original novel for me, since I read an English translation. Or, at least, I am going to assume that's what happened, because I was not interested in what was going on in the slightest.

I did perk up towards the end, and his last invention I would reluctantly qualify as a showstopper. I wish I could read a better story that focuses on that concept. Oh well, at least it was short.

UP NEXT: Kokoro by Natsume Soseki