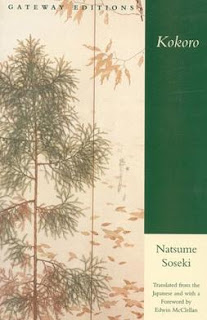 The List has a definite Western bias, so it's nice to see some diversity here with Kokoro. The 1001 album list was always a bit misguided when it came to their choices in world music, but I've enjoyed the Eastern entries on this List so far.
An unnamed narrator meets an older man on vacation. His respect for the man grows, and he begins to call him Sensei. The narrator learns from Sensei's wife that he visits the gravesite of a friend every month. Sensei refuses to tell the narrator about his past, and the narrator is forced to return home because of a family emergency. While at home, he receives a letter from Sensei that explains his mysterious visits to the cemetery.
Inevitably, something is always lost in translation. That being said, I still really enjoyed this story. I don't want to give too much away, but it was interesting to see the cultural difference in how certain events were handled in this story, versus how they would have transpired and been interpreted in an English novel. The reality of Sensei's dark past didn't quite live up to the hype, but I was still engaged for the entire length of the novel.
Worth reading, especially if you want to broaden your horizons with more world literature.
RATING: ****-
Interesting Facts:

UP NEXT: The Thirty-Nine Steps by John Buchan. This is a fun one!
Posted by Amanda at 3:53 PM