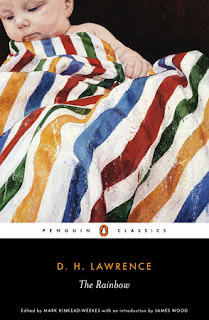 I was unaware that Women in Love, another D.H. Lawrence novel, was a sequel to The Rainbow, and read Women in Love first. And although the gaff offends my sensibilities, it really didn't ruin The Rainbow too much, as Women in Love didn't give away that many plot details.
The Rainbow tells the story of three generations of the Brangwen family, who live in the east Midlands of England. The novel begins with the tale of Tom Brangwen, a farmer who raises his stepdaughter as his own. It ends with Ursula and Gudrun, his granddaughters. Ursula receives the most attention from the narrator, and her story continues into Women in Love.
I really like Lawrence, I feel like he understands emotion very well. I feel like many writers settle into their characters experiencing 1-4 emotions per scene. Lawrence's characters jump from humiliation to triumph to anger to satisfaction to profound sadness, in the span of a few pages. Human beings are complicated, and he presents that perfectly.
Like other Lawrence novels, this has some racy material for the time, with Ursula developing a crush on a female teacher. I still don't think he has quite hit his stride as a writer, but that's just because I know how good his future novels are.
He's also a master at using symbolism effectively. Can't wait for the other Lawrence novels on the List.
RATING: ****-
Interesting Facts:
The novel was prosecuted in an obscenity trial in 1915, and 1,011 copies were seized and burnt as a result.
After it was banned, it was unavailable in the U.K. for 11 years.

UP NEXT: Of Human Bondage by William Somerset Maugham. One of my favorite novels of all time.
Posted by Amanda at 3:53 PM