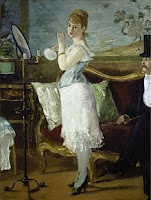 A little awhile ago I read L'Assomoir, the somewhat forgettable Zola novel about a couple being ruined by drink.  Nana was introduced as their daughter who turned to streetwalking to get by.  I wasn't exactly eager for a L'Assomoir sequel, but I suppose this was somewhat of an improvement.

Nana has been cast as the lead in the opera La blonde Venus.  While she is not very talented, she has a certain "je ne sais quoi" that makes her the toast of Paris.  The rest of the novel details the demise of every single man that pursues her.

Nana had the potential to be a great villainess, like Milady de Winter.  Unfortunately, she was just kind of bland.  Zola never really went into detail about what made Nana so special.  Perhaps he wanted to the reader to be able to project their fantasies on the character, although I think this gives Zola a tad too much credit.   In the end, the novel was just as sanctimonious as L'Assomoir, making this kind of a chore for me to get through.  We sure have had a lot of preachy novels lately.

Two more Zola novels to go!  Why did Therese Raquin have to be so good?  Now everything else is a disappointment.

Emile Zola used Blanche d'Antigny, a famous prostitute and actress, as his inspiration for Nana.

UP NEXT: The Portrait of a Lady by Henry James.  This is another one I have read already, so you can expect another post shortly!
Posted by Amanda at 3:11 PM