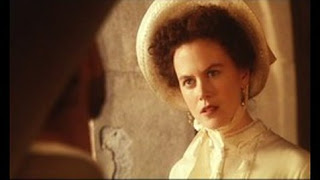 This is my first and only experience with Henry James, although he is represented on the List five more times.  We are off to a good start but I don't want to get my hopes up too high.  I have been hurt before (looking at you, Zola).

Isabel Archer is a young, beautiful American who is eager to experience life and maintain her liberty.  After the death of her father, she visits her rich uncle at his estate near London.  She receives two proposals of marriage but declines both, as she doesn't want to lose her independence.  Isabel receives a large legacy from her uncle, making her an even more desirable target for unscrupulous men, including the odious Gilbert Osmond.

I know Henry James has a bit of a reputation as being a drone.  Maybe this will come up more his later work, but I actually found his writing to be quite entertaining.  I did find the characterization of Isabel to be a bit off.  In the first half of the novel, she was independent and spirited.  In the second half, she shifted to a Clarissa-esque martyr and I couldn't figure out why.  Perhaps Henry James believed that women are, in the end, submissive beings.  I also found the ending to be annoyingly ambiguous.

In any case, I thought the first half of the novel was nearly perfect and I look forward to future Henry James novels.

Henry James has said that Isabel was inspired by several of George Eliot's heroines.

UP NEXT: The House by the Medlar Tree by Giovanni Verga.  I have never heard of this one, which makes me a little nervous...