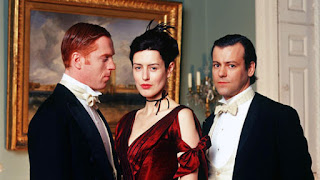 I snatched this one off the shelf of a library, back in those happy times when we were allowed to go to libraries. I was attracted merely by the title (because I love multigenerational sagas), and didn't even realize it was a List book. I should have known the Powers That Be find these stories as irresistible as I do.

It's difficult to give a short plot summary about a series like this; The Saga consists of three novels. Instead, I'll just focus on the characters. Soames Forsyte is a jealous solicitor, married to the intensely unhappy Irene. Soames longs to possess Irene fully, and for Irene to give him an heir. Irene has her own ideas about what will make her happy, and it is the pursuit of this desired independence that drives most of the narrative.

Soames is a fascinating character, simultaneously vicious and pathetic. Irene was also an interesting character. I was almost frustrated by her, because she seemed so self-possessed in some instances and then naive during other crucial moments. None of these characters were one-note wonders, which made them very real, and very sympathetic.

Highly recommended, and a welcome entry after 233's debacle.

Galsworthy won the Nobel Prize of Literature in 1932.

Listed as #123 on BBC's Big Read poll of the UK's best loved novel.

UP NEXT: The Jungle by Upton Sinclair. Anybody else have to read this in school?
Posted by Amanda at 9:57 AM