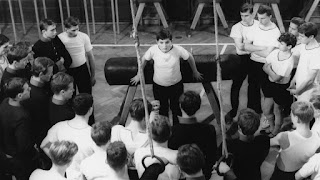 It's understandable to want to escape reality right now, and to dive into swashbuckling adventures or light-hearted romances. That has been my mood as well, so I have been doing a substantial amount of rereading during this time. I took a break from that carefree lifestyle to read Young Torless, and damn, that was a mistake.

Torless is a student of an Austrian boarding school, and is "friends" with fellow students Reiting, Beineberg, and Basini. Reiting suspects that Basini is stealing from him. Instead of turning Basini in and earning Slytherin 200 house points, Reiting and his friends decide to torture him themselves, physically, emotionally, and sexually.

At least 120 Days of Sodom didn't sneak up on me like this; I had heard of that one. I wouldn't say Young Torless was quite as disturbing as that novel, but man. What a grim perception Musil has of humanity. People are evil and no one person can change anything. I am not saying he's completely off base, but I am not in the mood to stew in all that ugliness.

Oh well, at least it was short.

Musil claims he wrote this novel "because of boredom."

UP NEXT: The Forsyte Saga by John Galsworthy. An old favorite.
Posted by Amanda at 10:31 AM