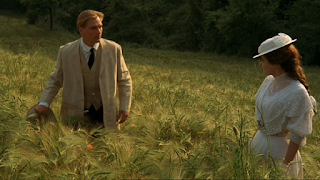 E.M. Forster sure has a lot of opinions to share about women, doesn't he? He's not hateful, but he's one of those writers that makes his female characters (at least the young ones) into nubile nymphs frolicking around fields of violets. When they inevitably show their humanity, the male characters are all fairly disappointed. I prefer when my female characters are treated as, well, people, but I guess Forster kept an intentional distance from women all his life, which might explain his confusion. We are more alike than we are different, Forster, trust me. I hope you can hear me from my pedestal.

But that's okay, there is plenty of other things to enjoy here. Lucy Honeychurch is the name of the main character, which kind of tells you everything you need to know about this plot. But I'll continue anyway. Lucy is touring Italy with her spinster aunt. I guess if you don't get married when you are nymph you transition right into spinster aunt, even if you are an only child. They encounter Mr. Emerson and his dashing son George, after Mr. Emerson gallantly offers to swap rooms with them, so they can have a nice view. Lucy finds herself drawn to George and must choose between him and the snobbish Cecil who also desires her hand.

This is the second of four Forster novels on the List. I'm always entertained by his plots, but his characters never seem real to me. Cecil, for example, behaved one way for most of the novel, then did a complete 180 at the end. I am not saying people can't change, and I would certainly hope characters evolve throughout a novel. But Cecil's shift felt very insincere to me.

I feel like Forster just wanted a sweet, innocent novel so he was afraid to cross certain lines. So the results aren't terribly original but manage to be enjoyable just the same. I am still looking forward to A Passage to India.

First novel that Forster worked on, although he put it aside to work on other projects before returning to it several years later.

Forster described this as not the best of his novels, but certainly the nicest.

UP NEXT: Strait is the Gate by Andre Gide