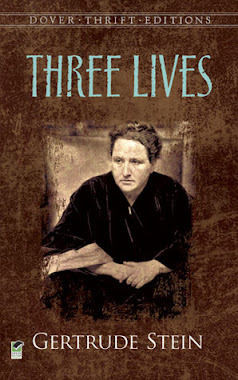 I had never read any Gertrude Stein novels, but I was excited to dive into her works. For one thing, it is always exciting to hear from a female author on the List, as they are few and far between. I also feel a certain kinship for her since we were both born in Pittsburgh. Of course, her family moved her to Vienna and Paris when she was three years old and my parents...didn't. Anyway, now that I have read one of her novels, my opinion of her has diminished somewhat.
Three Lives is separated into three novellas, "The Good Anna," "Melanctha," and "The Gentle Lena." "The Good Anna" tells the story of Anna, a spinster servant who loves her dogs. Yeah, I didn't find that one particularly compelling either. "Melanctha" is the longest story, and is so disgustingly racist that I don't want to spend too much time on it. Yes, I know it was a different time, but it was still really tough to endure. "The Gentle Lena" is about a passive German girl who marries Herman Kreder to please her elders, and goes on to live a quiet, miserable life.
Gertrude Stein is unapologetically repetitive. It's almost like every story is a song, and like a song, has a refrain. It's definitely a distinctive but irritating style. It felt a little condescending to the reader, and even more condescending to her characters, none of whom she seems to like.
I'm still looking forward to her other novels on the List, which sound like they contain more interesting plots, but this wasn't a great first impression of Stein.
RATING: **---
Interesting Facts:
Stein sent copies of this novel to W.E.B. Du Bois and Booker T. Washington. Good lord, really?
After a year of rejections, Stein had the book published at her own expense.

UP NEXT: Howards End by E.M. Forster. I've read this one already, so expect a new post shortly!