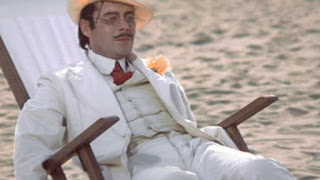 I am amazed that somebody as longwinded as Mann could manage to write a novella, but I get the feeling Thomas Mann was less interested in creating a great work here and more interested in producing an outlet for his...urges.
Gustav von Aschenbach feels compelled to visit Venice, where, unbeknownst to him, a serious cholera epidemic is taking place. So if anybody is looking for a 1001 read related to outbreaks, add this to your 2020 nightmare shelf, along with The Plague and Love in the Time of Cholera. Anyway, Gustav sees a 14 year old Polish boy in a sailor suit and falls in love with him. It's like Lolita, but with a boy. Of course, this was written before Lolita so I guess Mann beat Nabokov to the pederasty punch.
I really don't know what to say about this one; critics really seem to go gaga over it. I won't necessarily hate a novel just because the main character is loathsome or pathetic or whatever the hell Gustav was. For example, I actually liked Lolita, which is not an opinion I tout about much. But I get the sense that Mann was just as damaged as this character was, so there was something intrusive about the experience of reading this. It felt like he was trying to suppress his desires, and when that didn't work, tried to intellectualize those urges to lend them some sort of godly significance. Like he was saying, "I'm not being a predator, I'm paying homage to the Greeks." Gee, I wonder how many times police have heard that excuse before.
Of course, the writing is good, but there is a lot of good writing in the world. I wouldn't recommend spending time on this.
RATING: ***--
Interesting Facts:
Thomas Mann's wife said that the idea for the story came when they were visiting Venice. Thomas became enthralled with a 14-year-old, Polish boy who was traveling with his family. Um.
Mann confessed to being attracted to his young sons in his diaries. Double um.
UP NEXT: Sons and Lovers by D.H. Lawrence. I am really excited to read this one. I have been meaning to read more Lawrence for awhile now.