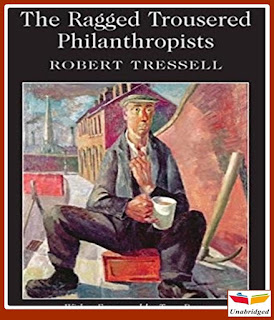 I know I have to get over Emile Zola eventually. But I miss how deftly he handled social issues in his novels. I am not saying he never crossed the line into melodrama, but I always felt there was a mutual respect between the narrator and reader.
You can tell this was written by an inexperienced author. There is a hesitation to let the work speak for itself and a lack of trust that the reader can grasp metaphors. Animal Farm, for example, doesn't begin with a preface that says: "and though these characters are animals, let the animals stand in the reader's mind for the very real workers who have suffered..."
But Noonan (Tressell is a pen name) didn't attend Eton or study the craft of novel writing. If he had been afforded those opportunities, I am sure he would have been capable of producing masterpieces. Instead, he was a poor house painter who I guess wanted to create a very long Socialism pamphlet.
Frank Owen tries to convince his fellow workers that capitalism is the cause of all their problems. In these sorts of novels, there is always the one good looking guy that can eloquently explain Socialism, and amaze others with his cool logic and charisma. Insert eye roll here. I don't like it when characters are reduced to mouthpieces. I guess one thing that stands out about this particular novel is that Tressell appears to be angrier at his fellow workers who do nothing to change their situation (The Ragged Trousered Philanthropists) than the people who exploit them.
The plot isn't good enough to make up for the preaching, and the preaching isn't persuasive enough to make up for the lack of plot.
RATING: **---
Interesting Facts:
Published after Robert Tressell's death from tuberculosis.
George Orwell has called this a book everybody should read. Sorry, I only take orders from Boxall.

UP NEXT: Tarzan by Edgar Rice Burroughs. This calls for a Phil Collins binge.
Posted by Amanda at 11:31 AM