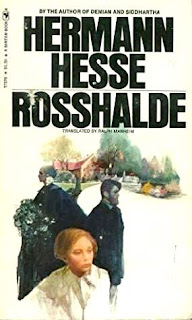 I return from my October hiatus of reading scary/disturbing novels, and now will spend the rest of the year trying to get those images out of my head. Since you asked, the best of the bunch were The House of Spirits, The Day of the Triffids, and Under the Skin. All of these are List books, so I'll be posting about them eventually.
Johann Veraguth is a celebrated painter, but is a virtual stranger to his wife and their eldest son, Albert. His only real consolation in life is his youngest son, Pierre, who still hasn't chosen sides in the family's cold war. Pierre falls ill, which has the effect of changing the family dynamic forever.
Well, that certainly packed a punch. Hesse manages to do a lot with a pretty short novel. He is clearly drawing on his own experiences of trying to balance having a family with the life of an artist. It's a beautifully written and thoughtful read, and has significantly improved my opinion of Hesse. I am looking forward to reading more of his works.
Not the most cheerful reading experience, but I haven't had one of those in a long time.
RATING: ****-
Interesting Facts:
Hesse worked against the Nazi party by reviewing and publishing the work of banned Jewish authors, including Franz Kafka.
His works were eventually banned by the Nazis.
UP NEXT: Locus Solus by Raymond Roussel. There's somebody I had no desire to hear from again.
Posted by Amanda at 12:36 PM