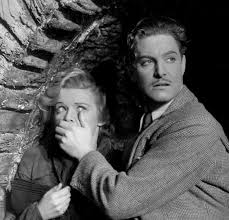 I read this book awhile ago, because it is short, it is fun, and Alfred Hitchcock made a movie out of it. We've got some heavy authors coming up, so it's nice to sprinkle in some John Buchans, Robert Louis Stevensons, and H.G. Wells to lighten things up every once in awhile.
Richard Hannay has just returned from South Africa, and has resigned himself to being a boring Brit  again. One night, he is accosted by an American who claims to be a freelance spy. He warns Hannay of an anarchist plot to assassinate Constantine Karolides, the Greek Premier, and thus ignite war in Europe. Hannay agrees to harbor the American, and predictably gets more than he bargained for.
These kind of stories are always fun, where an ordinary person is thrown into an adventure that is hopelessly out of their league. It's always entertaining to watch them wrangle with and outwit the professionals, as you can imagine what you'd do in the same scenario.  There is also a strong feeling of patriotism behind the story, and Richard clearly represents the ideal Englishman of the time, who would go out of his way to protect his country.
Just a fun story and a nice break from some of the heavier fare the List has to offer.
RATING: ****-

Buchan wrote the novel when he was in bed with a duodenal ulcer.

UP NEXT: The Rainbow by D.H. Lawrence. I've been on a D.H. Lawrence kick lately, so I'm excited to read this.
Posted by Amanda at 8:18 AM