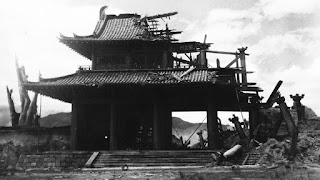 I read this story because I really like Akira Kurosawa's Rashomon. Turns out, this really has nothing to do with that film. Apparently, that movie is actually based off of another one of Akutagawa's stories, "In A Grove." Ugh, so many good books to read, so little time.
A recently fired servant and an old woman meet at the dilapidated Rashomon (which was the southern gate of Kyoto and a place where unclaimed corpses were dumped). They have a discussion on the ethics of the woman's behavior, as she is busy stealing the hair from corpses to make wigs.
I like the inclusion of short stories on the List. And I always find works like Rameau's Nephew intriguing, where you simply read a philosophical conversation between two characters. I am sure there have been many college essays that dissect the morality of this story.
I can't wait to read more Japanese literature on the List, which, knowing the Listmakers, probably won't be for awhile.
RATING: ****-
Interesting Facts:
Ryūnosuke Akutagawa died by suicide at the age of 35.
He wrote over 150 short stories.
UP NEXT: Under Fire by Henri Barbusse. I'm not opposed to reading another Barbusse, The Inferno was really good.
Posted by Amanda at 7:49 AM