Under Fire
Henri Barbusse
Around 350 pages
1916 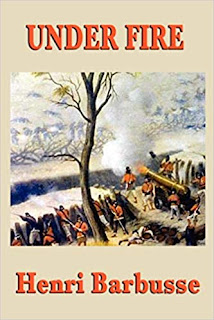 I thought that All Quiet on the Western Front was the quintessential World War I novel, but I guess Under Fire beat it by quite a few years. It's hard to say which novel is better; both contain grim accounts of trench warfare that are hard to stomach.
Under Fire doesn't exactly have a plot. The novel is made up of journal entries from a French soldier during World War I. He describes the violence he witnesses in shocking, fairly disgusting detail. He also relates the deaths of several of his fellow soldiers, as well as an account of a trench assault.
Obviously, it is impossible to capture all the horrors of war in a novel format, but Barbusse does an effective job of communicating the emotions of the soldiers, from absolute despair to steely resignation. It was surprising reading this novel after The Inferno, the other Barbusse novel on the List, that was much more domestic in its plot. Just shows how many ordinary men were ripped from normality into the nightmare of warfare.
This isn't a book I would recommend for the quarantimes, since we are all miserable enough already, but still a moving novel.
RATING: ****-
Interesting Facts:
Published before the war ended.
One of the first novels about World War I to be published.