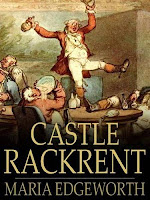 Kicking off the 1800s with another short novel that I was able to read in one sitting.  This is one of those books that is so short that you almost feel like you don't have to form an opinion of because it is over so quickly.  But woe is me, because this is a review blog and I must rate it.

This novel is a history of the Castle Rackrent and its various owners, told by the castle's steward, Thady Quirk.  I call using that name as my alias!  Anyway, it is often considered the first historical novel, the first regional novel, the first novel to use an unreliable narrator, and the first Anglo-Irish novel. So obviously this novel is quite influential.  Is it enjoyable, though?

Not really.  Because the novel is so short, we are given very flat, shallow characters.  There is also a great deal of anti Semitism, with the Jewish woman in the novel being obsessed with her jewels.

So overall rather dull but thankfully short.

The first novel of Maria Edgeworth and one of the few that her father did not edit.

Considered to be the first saga novel.