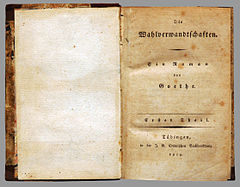 We seem to be on a streak of short, easy to find books which is making it easier for me to post with some frequency so expect a lot of posts coming up.  We are going to be seeing some familiar classics soon!

This is a weird one; when I describe it, it will sound like some Noel Coward comedy but I assure you, it is quite depressing.   Eduard and Charlotte are a bored married couple who fill their time doing meaningless tasks.  Eduard decides to invite his friend, the Captain, to stay with them, much to Charlotte's annoyance.  Eduard then persuades Charlotte to invite her niece, Ottilia, to stay as well.  Conveniently, Eduard falls in love with Ottilia and Charlotte falls in love with the Captain.  Chaos ensues.

I will begin with the positives.  For some reason I have always loved books or movies that portray the bored middle class (American Beauty, Office Space, Horrible Bosses, etc).  Suffering isn't always facing great trials but sometimes it is being faced with the same menial tasks on a daily basis.  This is kind of a weird quirk of mine so it may not be a huge selling point for you.  But I had to say it!  Anyway, the thesis of this work is that love is chemical and by putting it the confines of marriage is ridiculous.  It is an interesting thought, though at this point, not very original.  If I have to hear someone say "marriage is just a piece of paper", I might lose it.

I also found it interesting to compare Charlotte's and the Captain's love and Eduard's and Ottilia's love.  Charlotte and the Captain were serious and suffered a lot trying to control their passion.  Eduard and Ottilia really didn't care who they hurt and acted like they were in a Greek melodrama.  That kind of flame is the one that most people crave, but in the end Charlotte ends up the happiest.  Something to think about.

Wow, I have really yammered on in this post.  I will wrap it up by saying that while the novel had its high points, the characters were rather obnoxious.  Still, an interesting read.  Time to shut up now.

The title is derived from the chemical term that refers to the the tendency of substances to combine with certain substances in preference to others.

Francis Ford Coppola once proposed making a ten hour film version of this book in 3D.  Not surprisingly, that never worked out.