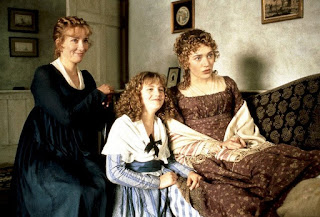 I think this is the first time in the list that I have come across something chronologically that I have already read.  It is particularly exciting because this is one of my favorite books.

I am a huge Jane Austen fan. I have read all her books, seen the movie adaptations, went to the National Gallery in London simply to see her portrait, and I even watched Becoming Jane, despite Anne Hathaway's inability to do a British accent.  Just watch the beginning and be frightened.
Anyway, I know a lot of people simply don't like her.  If that is the case with you, there is not much I can say to persuade you to read her novels.  There are plenty of authors that I simply cannot like (Charles Dickens and Mark Twain come to mind).  I love her, not only because she is hilarious, but because of the way she depicts sister relationships.  My sister is my best friend, so whether it is Jane and Elizabeth or Marianne and Elinor, I love reading about their closeness.

This is the story of two sisters, Elinor and Marianne, and their respective loves.  Elinor is very level headed and rarely shows what she is feeling while Marianne is reckless and impulsive.

I first read all the Jane Austen novels when I was in high school and I was immediately struck with how modern and relatable they were.  Now that I have worked my way to this spot in the list, I am even more impressed with her.  The romance novels of the 1700s were usually epistolary and portrayed some pure, infallible, and beautiful girl who everyone immediately fell in love with. This novel is just so different. The women are human, intelligent, and real.

I am reasonably sure that this novel can be enjoyed by men, though I have not collected enough data to be certain.  I urge male readers to comment so we can decide this.

I strongly recommend the film adaptation with Emma Thompson.  It is a great film with a great cast.

Austen was originally going to publish the novel in epistolary format but decided to change it.