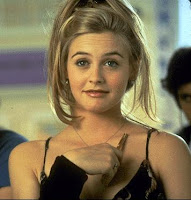 And my streak officially ends with this novel, the next one being Rob Roy by Sir Walter Scott, which I haven't read (really, who has?).  Expect that post is the next couple weeks.  For now, we have my favorite Jane Austen novel Emma.

Jane Austen said that Emma would be a character that no one would like.  I like her precisely because she isn't perfect or likable (unlike a certain Fanny Price).

Emma is a young, beautiful, rich, and witty woman who lives with her father.  She likes to take on projects, which for her means meddling into (and kind of ruining) other people's lives.  One of her projects is a young woman of inferior birth named Harriet Smith, who she condescendingly tries to improve.  The only man who isn't completely charmed by Emma is George Knightley. And he's dreamy!

I am a woman who constantly puts her foot in her mouth.  One time, I accidentally insulted someone's cousin who had died in Iraq.  Don't even ask me how that happened, I am still not sure.  My point is, I find Emma relatable, especially in a particularly cringeworthy scene when she insults Miss Bates in front of a large party.  Emma is constantly embarrassing herself and those around her.  While that doesn't make Emma particularly likable, it certainly makes her relatable.

Another great novel, you are probably getting sick of me saying that, but if you are going to read one Jane Austen, this is the one to read.

Maria Edgeworth was critical of the novel.  So jealous.

Adaptations include Clueless and Emma (1996).

First Austen heroine to have no financial concerns.