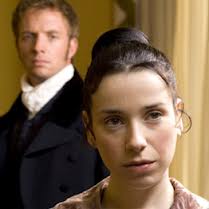 And we continue with Jane Austen with this little gem, which is probably the least popular of her novels.  Now, I think all Jane Austen novels are worth many reads so I will try to persuade (haha get it?) you to give this one a try as well.

This is the story of Anne Elliot.  Many years ago, she rejected a proposal of marriage of Frederick Wentworth because her parents were against, due to his lack of connections and wealth.  Now, many years later, Wentworth is rich and powerful but unable to forgive Anne.  Will these two ever get it right???

So I will admit, Anne is not the most exciting Austen heroine.  She is pretty much Fanny Price, but older.  That in itself is actually interesting, because most Austen heroines are young while Fanny is "past her prime" (aka around 27).  The plot is rather simple though, probably because Jane Austen died before she could polish up the novel.

I still love this book, though.  We have the funny scenarios, the great romance, and, though Anne may seem to be a bit of pushover at the beginning, a plucky heroine who rises above her surroundings.  It is also one of the shorter Austen books so you don't risk much by trying it.

The second Bridget Jones' Diary movie is loosely based on this plot.

Set in Bath, where Jane Austen spent several years.
Posted by Amanda at 8:15 AM